File for divorce online in 1 hour or less with our court approved Alabama divorce papers. 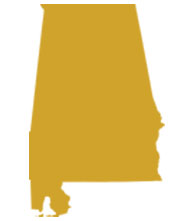 Download completed Alabama divorce forms based upon the answers you provide in the online interview. We provide Alabama State Approved downloadable Alabama divorce kits, complete with divorce instructions, to allow you to obtain a divorce in Alabama. Download your uncontested or no fault Alabama divorce papers and eliminate any divorce attorney. Click the Start Now button and begin your online divorce today.

Divorce Residency Essentials to Get Divorce in Alabama

The divorce may be filed for in any of the following:

Reasons for Divorce in Alabama

There are two primary categories of divorce filing in Alabama. They are fault and no-fault.  In order to file for divorce in Alabama, the proper grounds must be established.  Both spouses are involved in establishing these grounds, and both must substantiate and agree upon these, unless the divorcing spouse is trying to prove otherwise to the court.

No-fault reasons for divorce in Alabama include:

General reasons include, but are not limited to:

Custody of the Children in Alabama

A court in Alabama grants the custody of the children upon divorce. The child custody can be granted to either parent on the following grounds.

Alabama officially favors joint custody (but not equal physical custody) if in the best interests of the child and the parents agree. The wishes of the child are also a factor to be considered. There is a legal presumption against giving custody to any person who has inflicted any violence against either a spouse or a child. In abuse cases, the judge is required to consider any history of domestic abuse and may not consider the fact that a parent or spouse has relocated to avoid abuse.  Factors taken into consideration for Alabama include:

The judge has full discretion when it comes to issuing an allowance for maintenance to either spouse if the spouse does not have the means to do so for themselves.

This award may be made out of the property belonging to the other spouse, unless it is separate prop­erty (acquired by gift or inheritance, or acquired prior to the marriage) and was never used for the common benefit of the marriage.

In applying the statewide uniform guideline, the courts will consider the following:

Child support guidelines in Alabama are based on the official Child Sup­port Guidelines contained in the Alabama Rules of Judicial Administration: Rule 32. These guidelines are presumed to be correct unless there is a showing that the amount would be unjust or inappropriate under the particular circumstances of a case. A written agreement between the parents for a different amount with a reasonable explanation for the deviation from the guidelines will also be allowed. A standardized Child Support Guidelines form and Child Support Income Statement/Affidavit must be filed in every case in which child support is requested. There is also a procedure for expedited processing in child support cases. Alabama driver’s licenses may be suspended for failure to pay child support. [Code of Alabama: Title 30, Chapters 3-5 to 3-6.1,3-60 to 3-71,3-110 to 3-115, 3-170 to 3-179, 3-190 to 3-200 and Alabama Rules of Judicial Administration: Rules 32 and 35].

Alabama is an “equitable distribution” state and the judge has full discretion to divide any jointly-owned real estate or personal property, but does not have the authority to award the wife’s separate property to the husband (regardless of whether the wife’s separate property was obtained before or after the marriage). Gifts and inheritances are considered separate property and are not subject to division unless they have been used for the common benefit of both spouses. The property division need not necessarily be exactly equal, but it must be equitable. Marital fault may be considered in the division of property. [Alabama Case Law].

There is no legal provision in Alabama for mediation.