File for divorce online in 1 hour or less with our court approved Arizona divorce papers. 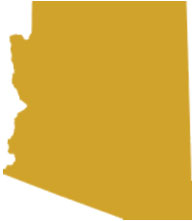 Download completed Arizona divorce forms based upon the answers you provide in the online interview. We provide Arizona State Approved downloadable Arizona divorce kits, complete with divorce instructions, to allow you to obtain a divorce in Arizona. Download your uncontested or no fault Arizona divorce papers and eliminate any divorce attorney. Click the Start Now button and begin your online divorce today.

Divorce Residency Essentials to Get Divorce in Arizona

One of the spouses must have lived in the state at least 90 days before filing for dissolution of marriage. The divorce should be filed in the county in which the petitioner resides at the time of filing. There is also a 60-day waiting period after the service of process on the Respondent (or after the Respondent’s acceptance of service. [Arizona Revised Statutes Annotated; Title 12, Chapter 401 and Title 25, Chapters 312 and 329].

Reasons for Divorce in Arizona

There are mainly two reasons of divorce in Arizona that is fault and general.  In order to file for divorce in Arizona, the proper grounds must be established.  Both spouses are involved in establishing these grounds, and both must substantiate and agree upon these, unless the divorcing spouse is trying to prove otherwise to the court.

No-fault divorce is a type of divorce in which the dissolution of a marriage has taken place without any wrong-doing from either party.  In Arizona, that includes:

This is the only recognized grounds for dissolution of a marriage in Arizona.  However, Arizona recognizes what are termed "covenant marriages," and those may be dissolved as a result of the following:

Custody of the Children in Arizona

A court in Arizona grants the custody of the children upon divorce. The child custody can be granted to either parent on the following grounds.

Upon divorce, court make child custody decision for a divorce in Arizona, court may consider the following points:

The court may award joint custody if it finds that to be in the best interest of the child.  When determining this, the court looks at the following conditions as well:

Either parent may be ordered to pay child support, without regard to marital miscon­duct, based on the following factors:

Awards of child support are to be paid through the court unless the spouses agree otherwise. In addition, there are specific Arizona Supreme Court guidelines for child support payments available from the Clerk of any Superior Court. The amount of support established by using the official guidelines will be the required amount of child support, unless the court finds such an amount would be inappropriate or unjust. Every child support order must assign one or both of the parents responsibility for providing medical insurance coverage for the child and for payment of any medical expenses not covered by insurance. Unless there is contrary evidence presented in court, the court will assume that the non-custodial parent is capable of full-time work at the Federal minimum wage (unless the parent is under 18 years of age and attending high-school). [Arizona Revised Statutes Annotated; Title 25, Chapters 320, 322, and 500-527].

Arizona is a “community property” state. Separate property is retained by the owner of the property. Community or marital property (property acquired during the marriage) is divided and awarded equitably. Marital misconduct is not considered in the division. The court may consider excessive or abnormal expenditures of community property, and any destruction, concealment, or fraudulent disposi­tion of community property in making the division. The court may place a lien upon a spouse’s separate property in order to secure payment of child support or spousal support. A special Notice regarding debts and creditors is provided by statute and must be included on any materials served to the respondent. In ad­dition, at the request of either spouse, the court shall order the spouses to submit a “debt distribution plan” which allocates the responsibilities for debts. Forms for this are included in Arizona Revised Statutes; Title 25, Chapter 318. [Arizona Revised Statutes Annotated; Title 25, Chapter 318].

Maintenance may be awarded to either spouse for sup­port if the spouse seeking maintenance:

Awards of maintenance are to be paid through the court unless the spouses agree otherwise. Maintenance agreements may be made non-modifiable by agreement of both spouses. [Arizona Revised Statutes Annotated; Title 25, Chapters 319 and 322].

Prior to filing for dissolution of marriage, either spouse may ask the court to order mediation for the purpose of a reconciliation to save the marriage or to obtain an amicable settlement and avoid further litigation. After a dissolution of marriage has been filed, either spouse may request that the dissolution of marriage proceedings be transferred to the Conciliation Court for mediation. Official forms for requesting this transfer are available from the clerk of any Superior Court. In addition, if one spouse denies that the marriage is irretrievably broken, the court may delay the case for up to 60 days and order the spouses to attend a conciliation conference. In addition, a judge may require spouses to attend conciliation conferences. Finally, there is a required delay of 60 days after the service of papers on the respondent spouse before any hearing may be held for a dissolution of marriage. [Arizona Revised Statutes Annotated; Title 25, Chapters 312, 316, 329, and 381.09+].