File for divorce online in 1 hour or less with our court approved California divorce papers. 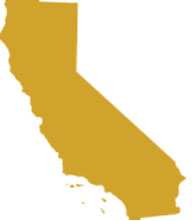 A spouse seeking to file for divorce must have been a resident of California for six months as well as be a resident of the county for three months where the divorce is to be filed. Also, a waiting period goes into effect six months after the documents have been served or the ap­pearance by the divorcee before the divorce is finalized. Partners in a domestic part­nership, under California Family Code Section 297, are able to end their partnership by using documents available from any county clerk, or through the Secretary of State's office. [Annotated Family Code; Sections 297, 298, 2320, and 2339].

Both spouses may each live in a separate location, provided that there is proof of the fact that both are living separately and not just upon legal presumptions. (California Code - Sections: 297, 298, 2320, 2339)

Reasons for Divorce in California

There are mainly two reasons of divorce in California that is fault and no-fault. In order to file for divorce in California, the proper grounds must be established.  Both spouses are involved in establishing these grounds, and both must substantiate and agree upon these, unless the divorcing spouse is trying to prove to the court.

No-fault reasons for divorce in California include:

The general reasons for divorce include, but are not limited to:

Custody of the Children in California

A court in California grants the custody of the children upon divorce. The child custody can be granted to either parent on the following grounds.

Upon divorce, the court will make a child custody decision for a divorce in California, based on the following points:

As a "Community Property" state, California divides all property accumulated during the course of the marriage in a 50-50 split in the event that an agreement cannot be reached.

Property gained together (i.e. joint property) is presumed to be community property, which affects the burden of proof.  This can then be rebuked by:

The courts go to great lengths to make the distribution of property as equitably as possible, and may take portions of one person's property to cover the costs of those disparities of the other.

Any debts accumulated after the date of separation, but prior to the decision made by the courts regarding the divorce or legal separation are confirmed as such:

Child support guidelines in California are based on the Income Shares Model for determining child support. The amount of monthly support determined by applying the guidelines is distributed in fair proportion according to the income of each parent. Then, the two support amounts are used to establish which parent will pay the other parent for child support. All income is most often based on past W-2's and child support worksheets are available at the clerk's office.

If the court feels there is chance that reconciliation may occur in a no-fault divorce, the judge may choose to impose a 30 day delay in the proceedings.